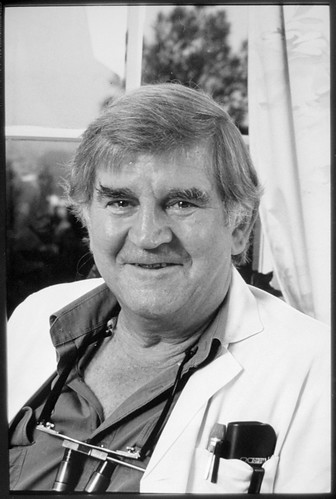 National Recipient Australian of the Year 1990

Fred Hollows was born in New Zealand and studied ophthalmology in Britain before immigrating to Australia in 1965. A committed humanitarian, Hollows soon began working with Aboriginal communities and was struck by the extremely poor standards of eye health. In 1971 he helped set up the community run Aboriginal Medical Service in Redfern. In the late 1970s he was Director of the government-funded National Trachoma and Eye Health Program, which visited more than 450 remote communities. Hollows subsequently began working overseas, training local medicos to perform simple eye surgery in Eritrea; he also pioneered a low cost method for manufacturing intraocular lenses.

When Hollows accepted his Australian of the Year award, he spoke out against Australia’s involvement in the First Gulf War, arguing that the money involved in producing one missile could restore sight to hundreds of thousands of Africans. In 1994 the Fred Hollows Foundation opened intraocular lens factories in Eritrea and Nepal, which are now self-funding.