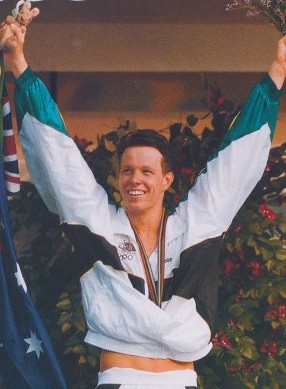 Brisbane-born Kieren Perkins began swimming as an eight-year-old as rehabilitation for a seriously injured leg. He proceeded to dominate the 1500 metres freestyle event for most the 1990s. Perkins won a silver medal at the 1990 Commonwealth Games in Auckland and again finished second at the 1991 World Championships in Perth. The following year at the Barcelona Olympics he smashed the world record by nearly five seconds to claim the gold medal.

Named Young Australian of the Year, Perkins continued to dominate men’s freestyle swimming for many years to come. He won four gold medals at the 1994 Commonwealth Games and held the world records for the 400, 800 and 1500 metre freestyle events for many years. Out of form and unwell he came from nowhere to claim a second Olympic gold medal at Atlanta in 1996. Four years later he won the silver medal behind Australia’s next great 1500 metre swimmer, Grant Hackett.