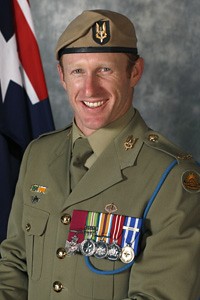 Mark Donaldson enlisted in the Australian Army in 2002 and displayed an early aptitude for soldiering, winning a number of prizes for his skills. As part of the Special Air Service Regiment he was deployed on operations to East Timor, Afghanistan and Iraq. An incident in Afghanistan led to his being awarded the Victoria Cross, Australia’s highest military honour for acts of bravery in wartime. When Mark’s unit was hit by an ambush, nine Australians were wounded.

As the battle raged around him, he deliberately drew enemy fire to himself on several occasions so that wounded soldiers could be moved to safety. Then when he saw a coalition force interpreter lying wounded, he ran 80 metres across exposed ground to rescue him and carry him to safety. This complete disregard for his own safety displayed exceptional courage. Since being awarded the Victoria Cross, Mark has conducted himself in a way that is impressive and makes him a role model for young and old. His bravery in the face of great danger saved lives and won him the highest respect.