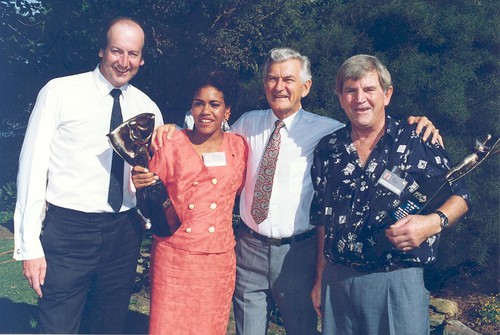 Cathy Freeman was born in Mackay, Queensland, and excelled at sprinting from a young age. As an eight-year-old she won a gold medal at the State Primary School Athletics Championships in Brisbane. Freeman was encouraged by her mother and stepfather to pursue her dream and became an inspiration to Aboriginal people with her subsequent success. As a sixteen-year-old she represented Australia at the 1990 Commonwealth Games in Auckland, where she was a member of the triumphant Australian 4x100m relay team. She was the first Aboriginal athlete to win a Commonwealth Games gold medal. In that year she also won the 200m at the Australian National Championships and represented her country at the World Junior Athletic Championships.