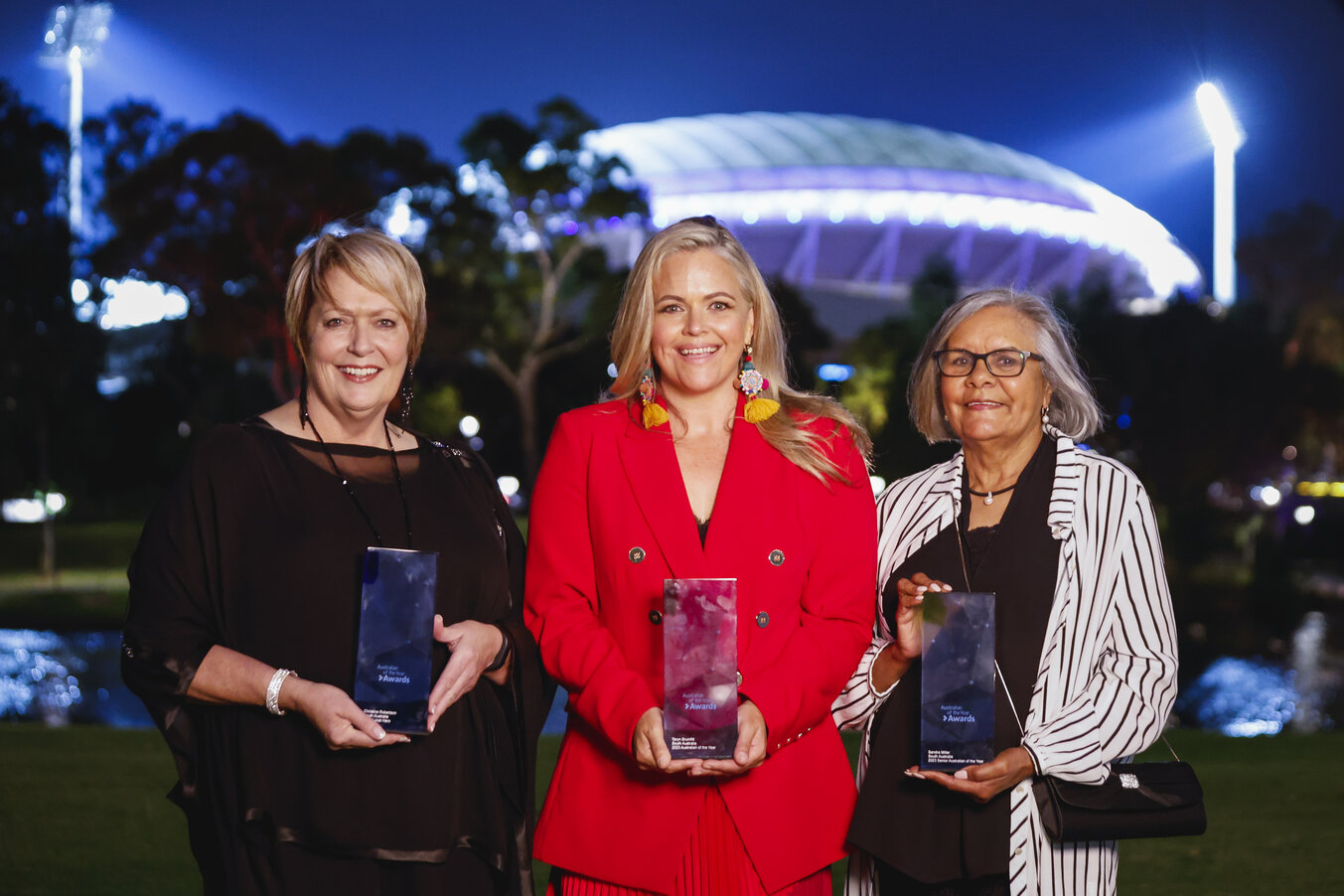 The South Australia 2023 Australian of the Year Awards have been announced in a ceremony at the Adelaide Convention Centre this evening.

The four South Australia award recipients will join those from the other states and territories for the national awards to be announced on 25 January 2023.

Documentary director Taryn Brumfitt leads the Body Image Movement, an Adelaide-based organisation that teaches people to love and appreciate their bodies. Her 2016 documentary Embrace tackled the serious issue of women’s body loathing and Taryn’s path to body acceptance. It was seen by millions of people in 190 countries and is available on Netflix.

Taryn has written four best-selling books. She released a documentary, Embrace Kids, in September 2022 that aims to teach nine- to 14-year-olds to move, nourish, respect and appreciate what their bodies can do.

She has collaborated with body image expert Dr Zali Yager to create an Embrace Kids companion parenting book. They have also created the Embrace Hub – a free, research-based resource for teachers, parents, children and communities on fostering body positivity.

Taryn’s work has reached more than 200 million people. She is an internationally recognised keynote speaker whose work is recognised by UN Women.

Aboriginal rights activist and advocate for Indigenous health and welfare Sandra Miller is the 2023 South Australia Senior Australian of the Year.

Sandra Miller, a proud Wirangu woman from the Ceduna area, has been a trailblazer, breaking down barriers for Aboriginal women aspiring to leadership roles at a time when they were under-represented.

Sandra trained as a social worker and in the early 1980s worked for the Department of Community Welfare in Adelaide. She pushed to change government policies that were detrimental to Aboriginal children and encouraged Aboriginal people to become foster parents.

She went on to play an important part in policy development and service design across key state government portfolios, including Aboriginal health, ageing and welfare.

Sandra continues to be a strong voice for her community since leaving the public service. She’s had leadership roles in Aboriginal health and legal rights groups, and holds multiple board and executive appointments. She has represented her community in the National Aboriginal and Torres Strait Islander Women’s Alliance and at the United Nations.

The 2023 South Australia Young Australian of the Year is professional soccer player and
co-founder, Barefoot to Boots, Awer Mabil (Note: Awer was unable to attend the presentation event)

Socceroo Awer Mabil is co-founder of the not-for-profit organisation Barefoot to Boots, which aims for better health, education, policies and gender equality for refugees.

His own unique way of celebrating a goal is a message to those struggling with their mental health: you are not alone and you can speak up.

The winger knows something about trying times. Awer grew up in a Kenyan refugee camp after his family fled civil war in Sudan, before coming to Australia at 10. Only a year after reaching his dream to play for the Socceroos, his sister died in a car accident in 2019.

Awer says that he now feels ‘unbreakable’. It is his experience of hard times, the memory of his sister and the knowledge that young people see him as a role model that drives him to perform. It’s what he does that Awer wants to be known for – not his background.

More than 65,000 pets across Australia have received a microchip thanks to Christine Robertson, but that wasn’t what she initially set out to achieve.

Christine co-founded the Lost Pets of South Australia charity in 2013 to reunite lost pets with their families. The volunteer organisation uses social media and its connections with the RSPCA and other animal welfare groups to get lost animals back home.

However, it soon became apparent that many pets were being lost because their owners couldn’t afford to get them microchipped. Microchip fees generally start at about $65. So Christine developed the Chipblitz program in 2015, allowing trained implanters to microchip a pet for just $10.

Chipblitz is now the biggest pet microchipping program in the Southern Hemisphere. It has a partnership with national pet goods store PETstock and 1,400-plus volunteers. More than 44,000 pets have been chipped in South Australia alone since the program began.

“The South Australia award recipients are extraordinary people working to change perceptions and behaviours and to foster understanding and opportunity,” said Ms Brand.