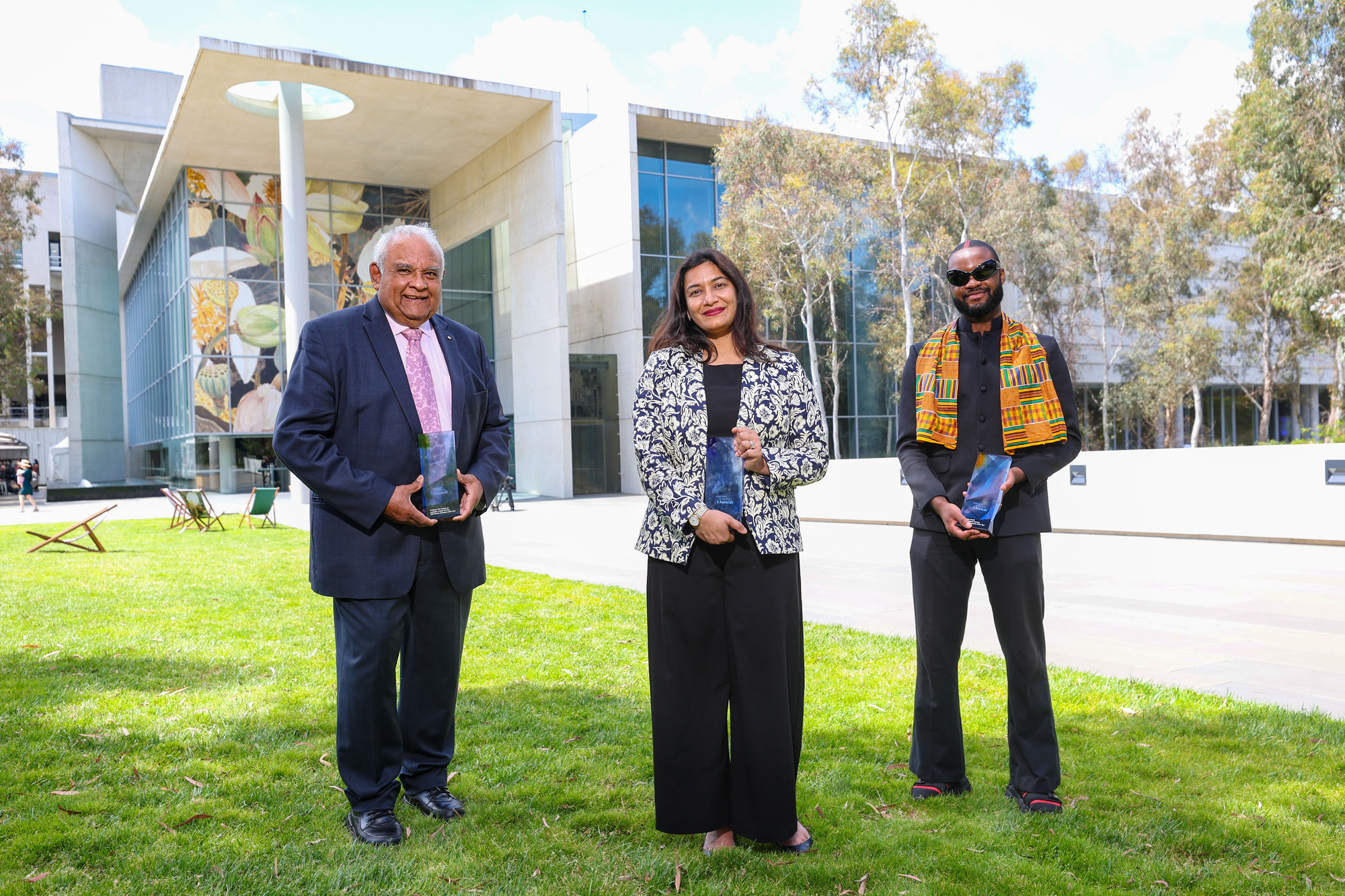 The 2023 ACT Australian of the Year Awards have been announced in the presence of ACT Chief Minister, Andrew Barr MLA, at a ceremony in Canberra today.

The four ACT recipients will join those from the other states and territories for the national awards to be announced on 25 January 2023.

The 2023 ACT Australian of the Year is Olympia Yarger, an insect farming pioneer and the founder of Goterra (Note: Olympia was unable to attend the Canberra event as she is currently overseas)

Olympia Yarger is a climate action warrior, a maggot farmer and founder of the Insect Protein Association of Australia. She even had a fly named after her by the CSIRO (Hermetia Olympea, a soldier fly species from the Daintree rainforest).

The founder of agritech start-up Goterra, Olympia is an insect farming pioneer and has developed an innovative waste management system that uses maggots to process food waste and reduce greenhouse gases.

Her ‘Maggot Robot’ system houses larvae of the black soldier fly inside portable units. Food waste is fed to the maggots and, similar to a worm farm, the larvae’s excretions become fertiliser. The maggots themselves become protein-rich feed for livestock and aquaculture.

It’s already being used by Woolworths and in Sydney’s Barangaroo precinct. So far, 47-year-old Olympia’s system has processed more than 35,000 tonnes of waste and saved more than 66,000 tonnes of carbon emissions.

The Kungarakan Elder has worked for more than 45 years at local, community, state and international levels championing the rights, responsibilities and welfare of Aboriginal and Torres Strait Islander peoples.

His call for Australia to address the gap in life expectancy between Indigenous and non-Indigenous peoples was the catalyst for the Close the Gap Campaign. He was instrumental in establishing the National Congress of Australia’s First Peoples; has led the Tackling Indigenous Smoking program; co-chaired Reconciliation Australia for over a decade; and co-led the co-design of a Voice to Parliament initiative.

Currently Chancellor of the University of Canberra, 68-year-old Tom is an active volunteer, consultant and the first Indigenous Australian inducted as a fellow of the Australian Academy of Science.

The 2023 ACT Young Australian of the Year is award-winning performer and songwriter Kofi Owusu-Ansah.

Kofi Owusu-Ansah is a Ghanaian-Australian poet, songwriter and rapper who uses hip-hop music to highlight issues such as racism and depression.

Kofi was born in Ghana in 1998. By the time he was two years old, his family had relocated to Canberra where the family now lives.

As a shy kid, he was attracted to poetry as a means of self-expression and self-exploration. Now, at 24, and on the cusp of an Australian tour with the Black Dog Band under the name of Genesis Owusu, he gets a similar kind of illumination from making music.

Smiling With No Teeth is a deeply personal record. Throughout, Kofi grapples with two distinct but entwined ‘black dogs’ – racism and depression – to resonant effect.

Dr Shamaruh Mirza, scientist and the co-founder of SiTara’s Story, is the 2023 ACT Local Hero.

Dr Shamaruh Mirza is a medical scientist, but she knows that feeling connected and having someone to talk to is as important as any medicine for good health.

Originally from Bangladesh, Shamaruh was seeing a lot of women dealing with depression as she did volunteer work among culturally and linguistically diverse (CALD) groups in Canberra.

Wanting to give women of diverse backgrounds a safe space in which to discuss their challenges and gain confidence, she co-founded SiTara’s Story in 2017. It would be somewhere women could discuss stigmatised topics without fear, form support networks and empower themselves.

Shamaruh, 44, was herself a finalist in the Canberra Community Spirits Award 2021.

“The ACT recipients are exceptional people, all pursuing life with passion and conviction,” said Ms Brand.