2023 AUSTRALIAN OF THE YEAR AWARDS ANNOUNCED 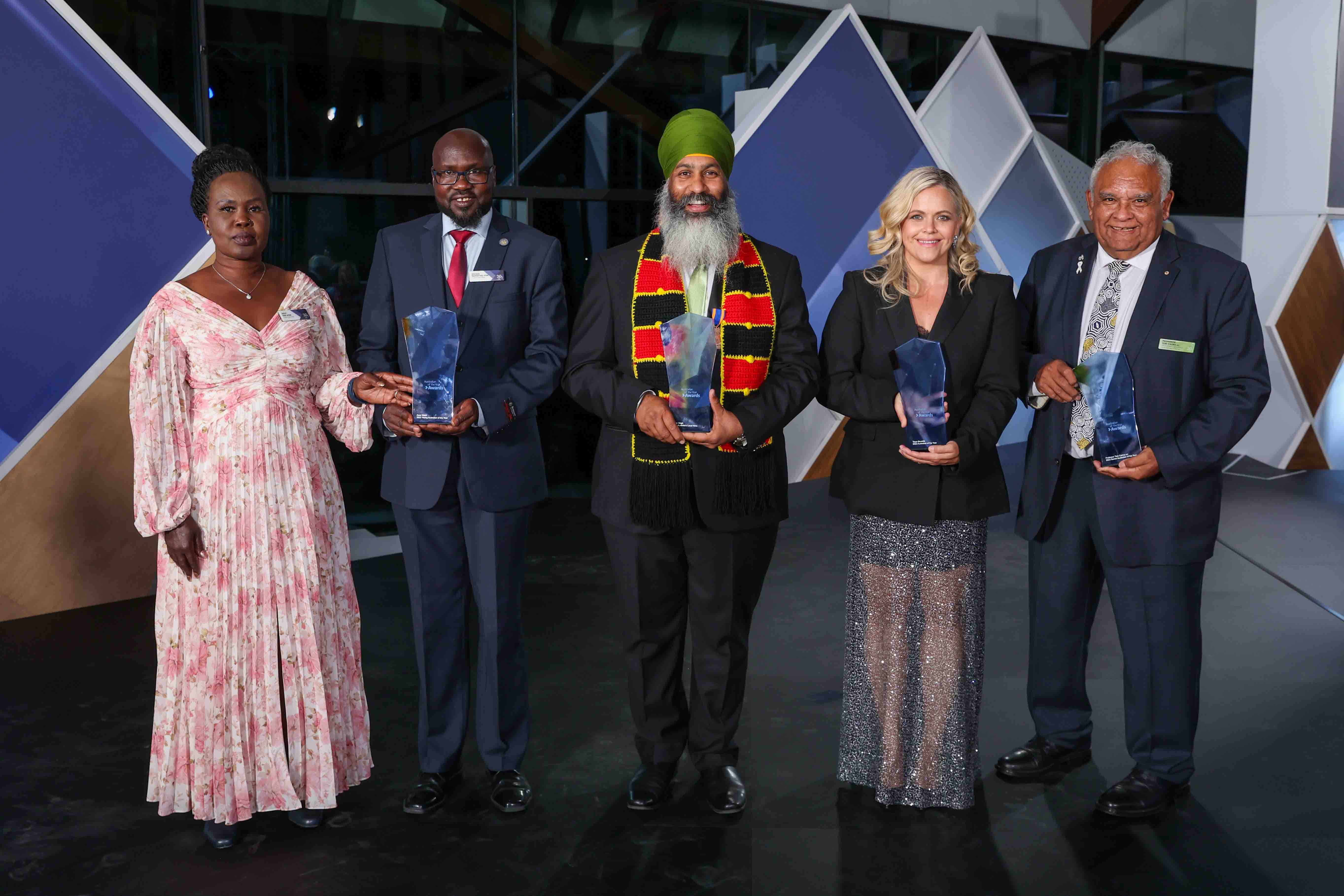 2023 AUSTRALIAN OF THE YEAR AWARDS ANNOUNCED

9:00pm AEDT, Canberra: A woman changing the way people around the world see and appreciate their own bodies; an Indigenous Elder whose life work has been committed to social justice and human rights; a Socceroo inspiring others to forge their own brave future; and a man driven to help all people in need have been named as the 2023 Australians of the Year.

The award recipients were presented with a glass trophy, a traditional Indigenous coolamon and clap sticks.

Her 2016 documentary Embrace tackled the serious issue of women’s body loathing and Taryn’s path to body acceptance. It was seen by millions of people in 190 countries and is available on Netflix.

Taryn has written four best-selling books. She released a documentary, Embrace Kids, in September 2022 that aims to teach kids aged nine to 14 to move, nourish, respect and appreciate what their bodies can do.

The 45-year-old has collaborated with body image expert Dr Zali Yager to create an Embrace Kids companion parenting book. They have also created the Embrace Hub – a free, research-based resource for teachers, parents, children and communities on fostering body positivity.

The 2023 Senior Australian of the Year is human rights and social justice advocate Professor Tom Calma AO of Canberra, ACT.

The Kungarakan Elder has worked for more than 45 years at local, community, state and international levels championing the rights, responsibilities, and welfare of Aboriginal and Torres Strait Islander peoples.

His call for Australia to address the gap in life expectancy between Indigenous and non-Indigenous peoples was the catalyst for the Close the Gap Campaign. He was instrumental in establishing the National Congress of Australia’s First Peoples; has led the Tackling Indigenous Smoking program; co-chaired Reconciliation Australia for over a decade; and co-led the co-design of a Voice to Parliament initiative.

Currently Chancellor of the University of Canberra, 69-year-old Tom is an active volunteer, consultant and the first Indigenous Australian inducted as a fellow of the Australian Academy of Science.

The 2023 Young Australian of the Year is Australian Socceroo and co-founder of Barefoot to Boots, Awer Mabil of Walkely Heights, Adelaide, South Australia.

(Awer was unable to attend the awards presentation in Canberra due to team commitments in Europe. His mother Agot Dau Atem and uncle Michael Matiop Dau Atem accepted the award on his behalf.)

Socceroo Awer Mabil is co-founder of the not-for-profit organisation Barefoot to Boots, which aims for better health, education, policies and gender equality for refugees.

His own unique way of celebrating a goal is a message to those struggling with their mental health: you are not alone and you can speak up.

The winger knows something about trying times. Awer grew up in a Kenyan refugee camp after his family fled civil war in Sudan, before coming to Australia at 10. Only a year after reaching his dream to play for the Socceroos, his sister died in a car accident in 2019.

Awer says that he now feels ‘unbreakable’. It is his experience of hard times, the memory of his sister and the knowledge that young people see him as a role model that drives him to perform. It’s what he does that 27-year-old Awer wants to be known for, not his background.

The 2023 Australia’s Local Hero is the founder of Turbans 4 Australia, Amar Singh of Prestons, Sydney, NSW.

2023 marks the 20th anniversary of the Local Hero award category.

Amar Singh believes helping others should not be limited by religion, language or cultural background.

Amar, 41, founded a charity after experiencing racial slurs and insults because of his Sikh turban and beard. He wanted to show people they didn’t need to be afraid and began helping struggling Australians.

Every week, Turbans 4 Australia package and distribute up to 450 food and grocery hampers to people experiencing food insecurity in Western Sydney.

They also raise awareness and funds for important causes while promoting multiculturalism and religious tolerance. But the organisation is best known around Australia since its founding in 2015 for transporting emergency goods to those in need.

Turbans 4 Australia has delivered hay to farmers experiencing drought; supplies to flood victims in Lismore and bushfire-impacted people on the South Coast; food hampers to the isolated and vulnerable during COVID-19 lockdowns; and supplies to the Salvation Army in central Queensland in the devastating wake of Cyclone Marcia.

“The 2023 Australians of the Year are great examples of the Australian spirit. Their courage, determination and fearlessness are an inspiration to us all,” said Ms Roche.

“Individually brilliant, Taryn, Tom, Awer and Amar share a common bond – using their life experience as a power for good, helping others around them and making the world a better place.

“Taryn has inspired millions of women around the world to be more comfortable in their own skin.

“Tom has dedicated his life and career to being a champion of equality for Aboriginal and Torres Strait Islander peoples, lighting the path towards reconciliation.

“Awer fled conflict and went on to represent Australia at the highest level as a Socceroo – an extraordinary achievement. He has used his success to co-found Barefoot for Boots, a not-for-profit that supports and advocates for other refugees.

“Amar has turned his own experience of discrimination into a positive, and sparked a movement that helps thousands of people put food on the table.

“These are an extraordinary group of Australians of whom we can all be incredibly proud.”

Ngunnawal Knowledge Holder Richie Allan has produced a coolamon and set of clap sticks specially for the 2023 Australian of the Year award recipients. The coolamon, a tool for carrying food, babies and performing smoking ceremonies, holds significance to the Ngunnawal people for day-to-day purposes. The clap sticks are musical instruments made from yellow or apple box wood to create sounds that connect to spirits and Mother Earth. These artefacts have been used since time immemorial by Ngunnawal people and have been gifted to signify a connection with all Australians to Ngunnawal people and Mother Earth.

This year’s trophies have been designed and produced by the Australian National University through a collaborative effort of staff and students of the glass Workshop in the ANU School of Art & Design. The geometric nature of the design aims to represent the multiple facets that have shaped Australian society, embodying a nation that is confident in its leadership, contemporary in its outlook and distinguished by its diverse community. The facets also capture the points of the Southern Cross, the star of federation, and are rendered in a brilliant blue symbolising the Australian sky. Each award has been created through a process of cast glass, and meticulously ground and polished by hand. The awards have been a wonderful project for students to apply their creative and technical skills to complete a professional commission.

For further media information on the 2023 Australian of the Year Awards, please contact:

For more information on the Australian of the Year Awards, visit australianoftheyear.org.au