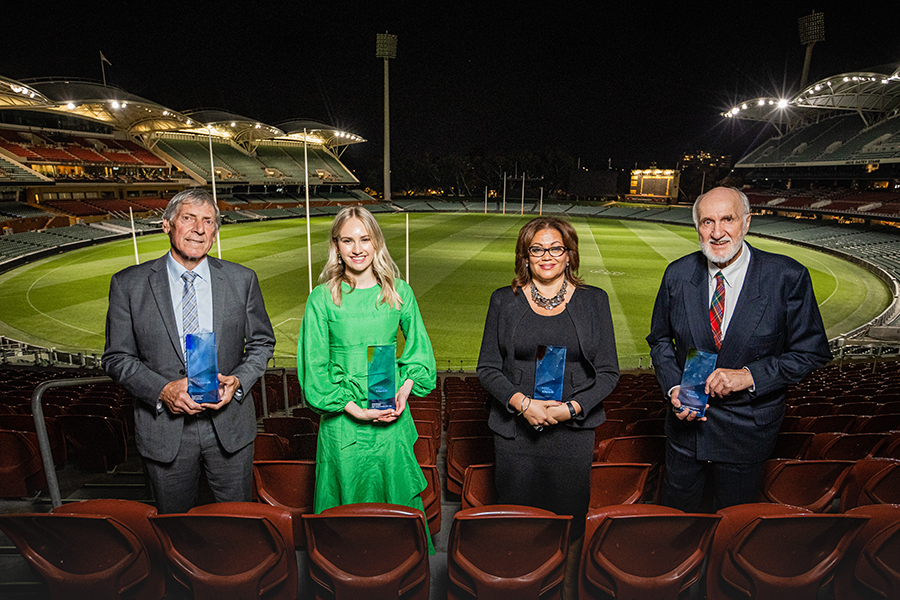 The four SA recipients will join those from the other states and territories for the national awards to be announced on 25 January 2021.

The 2021 SA Australian of the Year is leader, changemaker and visionary Tanya Hosch.  Tanya is the first Indigenous person and second woman appointed to the AFL executive.  The 49 year old has held leadership roles in sport, the arts, culture, social justice and public policy.  One of the pre-eminent Indigenous leaders pursuing constitutional recognition of Australia’s First Nations people, Tanya’s principled leadership is transforming the AFL – advancing women, Aboriginal and Torres Strait Islander people, gender-diverse Australians and the entire community. Tanya championed the first Indigenous player statue of Nicky Winmar and instigated a review of anti-vilification policy within the code.  She helped secure an apology for Adam Goodes from the AFL and delivered a new industry framework to help prevent racist treatment of players. Tanya also helped found and advocacy organization The Indigenous Players Alliance.  She drove a new respect and responsibility policy enabling women to seek redress for unacceptable behaviour and a world-first gender diversity policy for a contact sport.  In 2020, she drove a hugely successful social media campaign aimed at informing and protecting Indigenous communities from COIVID-19.

Disability advocate Professor Richard Bruggemann is the 2021 SA Senior Australian of the Year.
At 76 years old, Richard is continuing to make a difference to the lives of people living with an intellectual disability. Throughout his career, he has provided expert advice to governments on disability services, legislation, inclusion and rights. He is a dedicated volunteer, has sat on more than 20 non-government boards and committees, and is a prolific writer on topics of concern for the disability community. This year, he was called on by the South Australian Government to join the special taskforce investigating the tragic death of cerebral palsy sufferer, Ann Marie Smith. Richard was also appointed to a new government role to assess the temporary orders to protect people living with a cognitive or mental impairment from the spread of the COVID-19 virus. His ongoing leadership has helped create a community service system that helps people with intellectual disability and their families enjoy a better quality of life.

The 2021 SA Young Australian of the Year is social entrepreneur Isobel Marshall.
At just 18 years of age, Isobel launched a social enterprise business to help women around the world by breaking down stigma around menstruation and providing greater access to hygiene products. With business partner Eloise Hall, she co-founded TABOO after crowdfunding $56,000 to launch their range of products in August 2019. TABOO sells high quality, ethically sourced, organic cotton pads and tampons to an Australian market, with 100 per cent of net profits going to One Girls – a charity providing education programs for girls and women in Sierra Leone and Uganda.  Locally, Isobel and TABOO have partnered with Vinnies Women’s Crisis centre, providing free access to pads and tampons for women who require emergency accommodation in South Australia. Recognising period poverty is not just a big city issue, they also support the Ngaanyatjarra Pitjantjatjara Yankunytjatjara Women’s Council. Now 22 years of age, Isobel is also a full-time student at the University of Adelaide, where she is studying a Bachelor of Medicine (MBBS) and a Bachelor of Surgery.

Respectful relationships advocate Russell Ebert OAM is the 2021 SA Local Hero.
Former footballer Russell is a legendary figure with the Port Adelaide Football Club. A four-time winner of the Magarey Medal, awarded to the best and fairest player in the South Australian National Football League, he’s considered one of the club’s greatest players of all time. Today, Russell continues to give back to the club and the South Australian community through his leadership of the club’s Power Community Ltd (PCL) youth programs. He is particularly passionate about PCL’s Power to End Violence Against Women (PTEVAW) program, which he delivers to Year 10 students around the state. Developed with Centacare Catholic Family Services and the South Australian Department for Education, PTEVAW challenges gender-based attitudes and promotes respectful relationships and an end to domestic violence. The program has reached more than 5,000 students since starting in 2016.Russell is also a passionate supporter of children living with disabilities and is a fundraising ambassador for disability services organisation, Novita.

“The 2021 SA Australians of the Year share a motivation to bring about change which benefits people,” said Ms Brand.

“They are leaders and visionaries making a real difference in people’s lives.”