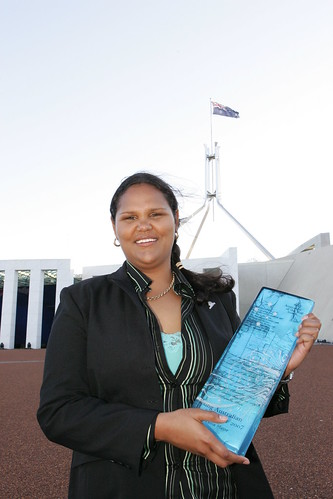 Tania Major is a Kokoberra woman who grew up in the Indigenous community of Kowanyama in Far North Queensland. She completed her secondary education in Brisbane and was the first member of her community to gain a university degree, studying criminology at Griffith University.

In 2004 she attracted attention as the youngest person ever elected to the Aboriginal and Torres Strait Islander Commission. She also took up a position as Youth Ambassador at the Cape York Institute for Policy and Leadership. Major spoke openly about social problems affecting her community, including alcoholism, domestic violence and youth suicide. She aimed to lift the ‘blanket of shame’ shrouding these issues and work with government to end welfare dependency and improve health and education for Indigenous Australians.

Accepting her award, Major said ‘I’m proud to be an Aboriginal Australian and to have been recognised and acknowledged for the work I’m involved in.’