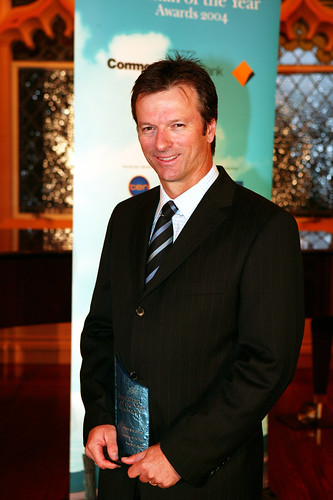 Raised in western Sydney, twenty-year-old Steve Waugh debuted for Australia in the 1985 Boxing Day Test. He initially had more success in One Day Cricket and was a key player during Australia’s 1987 World Cup win. Inconsistent in test matches, Steve was replaced by his twin brother Mark in 1991, but he returned two years later and was the top-ranked international batsman by 1995. Waugh succeeded Mark Taylor as captain of the test team in 1999 and presided over an era of Australian dominance, including a record 16 consecutive victories. In 2003 he saved his flagging career with an inspirational innings at the Sydney Cricket Ground, reaching his century on the last ball of the second day.

Waugh retired in 2004 having played a world record 168 test matches and 325 one-day internationals. His regular tour diaries were frequent bestsellers and he was well known for his philanthropic work with victims of leprosy in India.