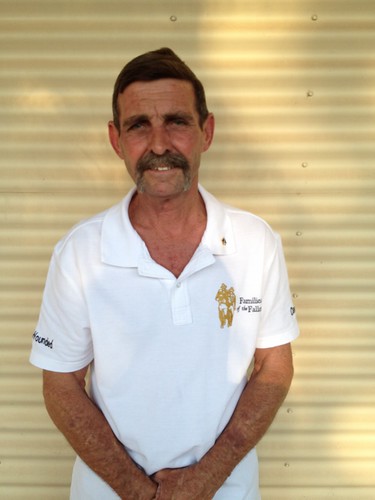 After serving in the Royal Australian Air Force for 22 years, Ray Palmer was extremely proud when his son, Scott, became a Commando with the Australian Army. Â Scott was serving in Afghanistan when he was killed in a helicopter crash in 2010. Â Since then, Ray has worked tirelessly to help other parents of the fallen and the hundreds of servicemen and women who return with physical and psychological wounds.Â  Ray has walked 400 kilometres in the Territory heat, cycled across the Nullarbor Plain and shaved his moustache to raise awareness and funds for the Commando Trust Fund.Â  Reaching out to support a new generation of Australian war veterans, Ray has accompanied wounded soldiers along the Kokoda Trail four times.Â  An inspiration and a lifeline, Ray has put aside his own grief to provide guidance, counselling and mentoring for others.Â  Rayâ€™s story is one of a dad and an active community member who has turned his personal tragedy into selfless action for others.