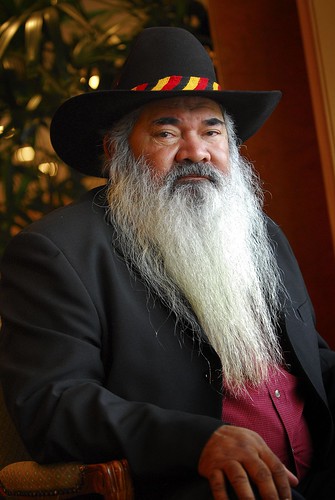 Patrick Dodson has given a lifetime of service to the Australian community. With his trademark long flowing beard and Akubra, he has been a striking figure at the forefront of Indigenous issues. In 1975, he became Australia’s first ordained Aboriginal Catholic priest but after ongoing challenges with the ecclesiastical hierarchy over his beliefs about Catholicism and traditional Aboriginal spirituality he eventually left the priesthood. In 1977, Patrick was the founding chairman of the Council for Aboriginal Reconciliation and subsequently became known as the ‘Father of Australian reconciliation.’ During his chairmanship he brought together leaders within the Aboriginal, mining, religious, pastoral, and cultural communities, culminating in the historic Aboriginal Reconciliation Convention.

In 1981, he joined the Central Land Council and was later appointed director, playing a key role in many politically sensitive negotiations with the Commonwealth and Northern Territory Governments. His sensitive approach saw many successes for Indigenous land rights, including the return of the Uluru Kata-Tjuta National Park to traditional owners. He was also appointed as a commissioner for The Royal Commission into Aboriginal Deaths in Custody. Patrick has devoted his life to building bridges between Indigenous and non-Indigenous Australians. He has demonstrated that reconciliation is a practical reality and a future that we should all be working towards.