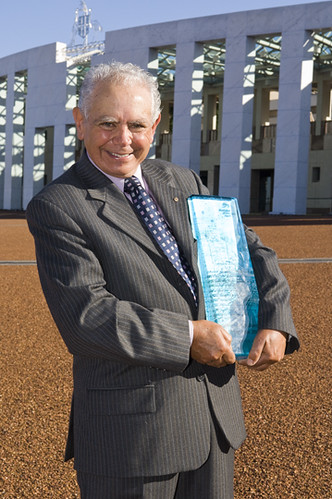 Italian-born Pat LaManna immigrated to Australia as a sixteen-year-old with little education and no English. He first worked picking potatoes near Colac, but subsequently took a job in a fruit shop because he was keen to learn the language of his new home. In 1972 he formed the successful wholesale company La Manna Bananas; in the same year he founded the Lions Club of the Melbourne Markets, which became the highest fundraising Lions Club in Australia.

LaManna’s own experience of economic adversity has inspired his support of many charities in Australia and overseas. After suffering a stroke in his late sixties, he formed the Pat LaManna Cancer and Stroke Foundation, which has raised over $1.5 million for scientific research. He also organised a successful appeal for the bionic hands department at the Royal Children’s Hospital. In 1997 LaManna established the Melbourne Passion Play, a free outdoor event that he funds each year.