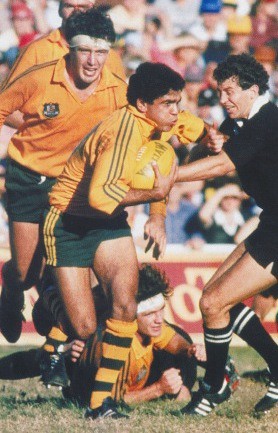 In a short but brilliant career Mark Ella established himself as one of Australia’s greatest Rugby Union players. Born into a large Indigenous family in La Perouse, Sydney, Ella debuted for Australia during the 1980 Bledisloe Cup series against New Zealand. In the third test he set up a try with a brilliant round-the-body pass, cementing his place in the Wallaby team. Ella had impeccable ball handling skills and a renowned ability to read the play. He was a key architect of the running style of rugby that brought Australia considerable success in the early 1980s.

In 1982 he became the first Indigenous Australian to captain the Wallabies. Ella was named a Member of the Order of Australia in January 1984. Later that year, during Australia’s clean sweep of England, Ireland, Wales and Scotland, Ella scored a try in each of the four tests. He then surprised the rugby world by retiring at only 25 years of age.