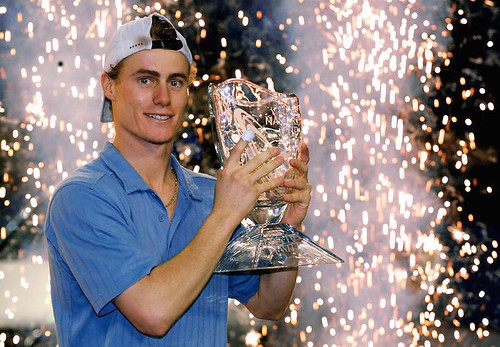 Lleyton Hewitt developed a passion for tennis after attending the Australian Open as a young child. As an unknown sixteen-year-old he won his first major tournament in his hometown of Adelaide, beating Andre Agassi in the semi finals. Hewitt claimed his first Grand Slam singles title in 2001, defeating Pete Sampras in straight sets at the US Open. Later that year he won the prestigious Tennis Masters Cup and became the youngest World Number 1 player in the history of men’s tennis. Hewitt confirmed his rise to the top was no accident by retaining his top ranking for 75 weeks. He won a second Grand Slam title at Wimbledon in 2002.

Hewitt’s spirited on-court behaviour has provoked controversy, but his mental toughness and never-say-die attitude has also attracted many fans. He is a loyal servant of the national team, winning more Davis Cup singles matches than any other Australian player.