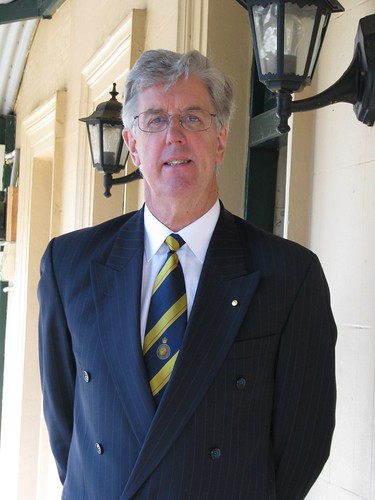 From an early age Layton Hodgetts developed a passion for music and after moving to New Norfolk, a small town in Tasmania’s Derwent Valley, he discovered that there was little to do for those not interested in sport.  So in 1993, Layton  developed the Derwent Valley Community Band. The following year a cultural exchange saw the band go to Japan and perform as part of Band Expo. The band was soon invited to play at events across Tasmania and then in 1997 to attend the Calgary Stampede in Canada, this time as a marching band, an arena in which they had no experience. After many hours of practice under Layton’s tutelage they achieved an amazing score of 95 per cent for their performance. Since then the band has toured to Austria, Czech Republic, Germany, France and Scandinavia, and performed at the ceremony to open China’s participation for the Olympics and the royal wedding parades for Princess Mary and Prince Frederic in Denmark.

Layton is now a judge for bands throughout the world and was awarded a gold medal for conducting at the 2008 European Championships. He is an inspiration to his community for his determination and passion to create something that they can contribute to and be proud of.