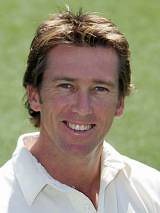 Glenn McGrath is one of Australia’s most loved cricketing legends. Since first wearing the baggy green cap in Perth in 1993, he has gone on to become the most prolific fast bowler in test cricket history, spearheading Australia’s bowling attack for over a decade.

Professionally he has always demonstrated an unerring will to succeed, but off the field it is the way he has handled personal struggles that has gained him admiration. Glenn’s wife, Jane, was diagnosed with breast cancer in 1997, cancer of the hip six years later and had a brain tumour removed in early 2006. Together they established the McGrath Foundation, with an aim to provide funding for breast care nurses on a national basis and provide greater public awareness of breast cancer, particularly amongst younger women. The McGrath Foundation is now a major fundraiser for and supporter of people with breast cancer. In June this year Jane lost her 11-year battle with cancer, leaving Glenn to care for their two children. Throughout it all Glenn has shown enormous strength and dignity, setting an inspirational example.