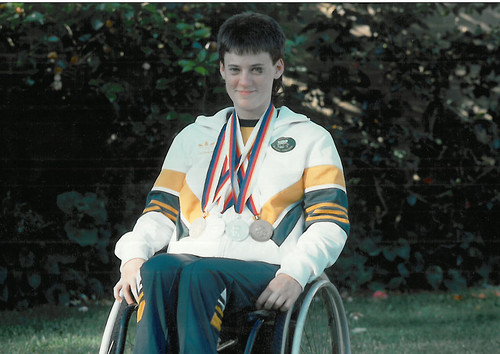 ACTNational RecipientYoung Australian of the Year1985

Deahnne McIntyre was born in Canberra with spina bifida and became a champion junior wheelchair athlete. As a fourteen-year-old she won sixteen medals (including nine gold) at the Australian Junior Wheelchair Games, competing in events as diverse as wheelchair racing, javelin, discus, shot put, table tennis and swimming.

Australia Day Council Chairman John Newcombe described Deahnne’s feats as ‘an inspiration not only to the disabled but to the able bodied. Such excellence cannot go unrecognised.’ As Young Australian of the Year Deahnne told guests at a Brisbane Australia Day luncheon that people who adopted a positive attitude to life could achieve much more. McIntyre was awarded a Medal of the Order of Australia in 1988 and went on to win a gold medal, two silver medals and a bronze medal at the Seoul Paralympics. In 1999 she took up the new Paralympics sport of powerlifting and has finished in the top five in Sydney, Athens and Beijing.