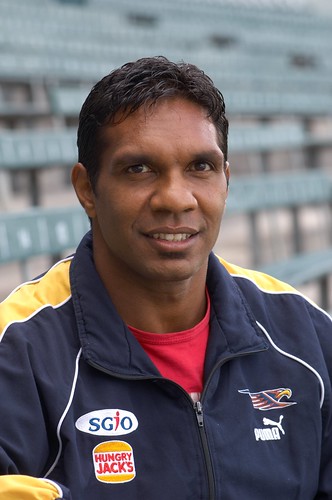 This year, footballer David Wirrpanda was named the ninth most influential Indigenous Australian by The Bulletin. His career began at the young age of 16 when two West Coast recruiters saw him play and were impressed by his skills. He made the difficult decision to move away from his family in Victoria to join the Eagles in Perth, and at 17 became their youngest ever debutante. He recently played his 200th game and became a life member of the AFL. David has used his influence to encourage young Indigenous people to get an education.

In 2005, he launched the David Wirrpanda Foundation to assist and develop underprivileged young people through education, promoting healthy lifestyles and strong role models, and building self-esteem. His aim is to make change slowly from the ground up. He wants to increase the retention of Indigenous students in school, and improve their life choices after leaving school by encouraging further study or entry into the workforce. Since establishing programs in Perth and Roebourne, school attendance and behaviour has improved. David describes the realisation of his Foundation as a ‘dream come true.’ ‘If I can help the kids even a little bit, I will be able to sleep each night.’