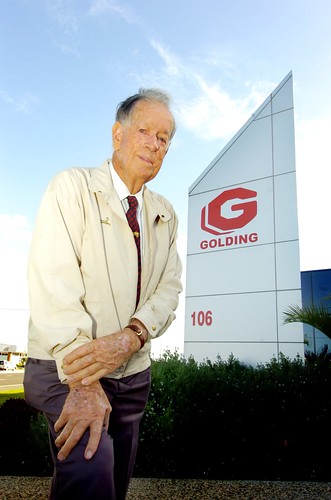 When Gladstone’s Cyril Golding started his business as a sole operator in 1942 he had no idea that it would become a mining and construction company employing 1000 people and running one of the largest privately owned earthmoving fleets in the Southern Hemisphere. Under Cyril’s leadership Golding Contractors has played a prominent role in shaping the economic development and prosperity of Queensland, undertaking many major civil infrastructure projects and mining developments. Furthermore, Cyril’s voluntary contribution to community life has been so significant that he is often referred to as Mr Gladstone. He has supported the Red Cross emergency accommodation facilities, the Gladstone Regional Art Gallery and Museum, and the Central Queensland University Library, which carries his name. He has also contributed financially to a wide range of charitable causes.

Cyril was born with a hole in his heart and predicted to live only seven days. He survived a further two similar predictions during his life, and has recently retired as the company’s managing director at the age of 87. He is greatly admired and held with tremendous affection by all those who know him.