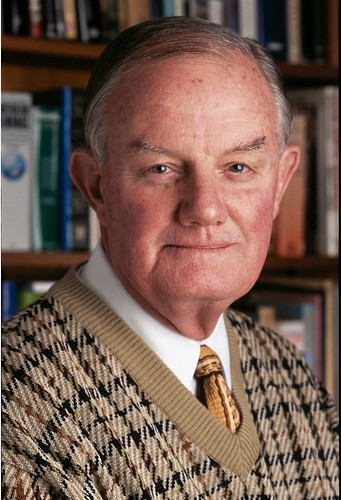 Born in Longreach, Bruce Campbell’s working career was devoted to rural industry. Beginning in the wool department, Campbell rose to the position of General Manager and Director of the Primac Holdings. He retired in 1983 and subsequently served as Chairman of the Livestock and Meat Authority of Queensland and President of the Droughtmaster Cattle Breeders Society. Campbell’s lifelong commitment to community work is epitomised by his work as a surf lifesaver; he was Queensland President of the Royal Life Saving Society in the 1970s and was named ‘Lifesaver of the Century’ in 2005.

In his late sixties, Campbell became increasingly concerned at the growing divide between urban and rural communities in Australia. Accordingly, he devised and organised Australia’s Year of the Outback in 2002, a highly successful initiative that celebrated the community spirit of country Australians. Several years later, Campbell continues to chair the not-for-profit community organisation ‘Outback Calling.’