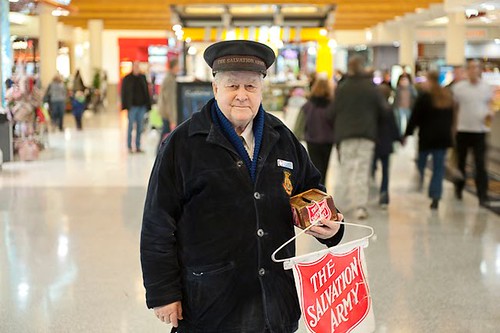 Alan Jessop is a familiar face to Canberrans passing through the city centre. For 22 years he has collected for the Salvation Army, watching the city evolve and change around him. As new buildings have gone up, Alan has moved his worn stool to a new location. Alan has previously worked as a tailor, plumber, gas fitter, dairy farmer and has owned a number of post offices, but it is his many years of service to the Salvation Army for which he is best known. There are not many prepared to sit for hours collecting but Alan is inspired by the Salvation Army’s good work in the region which includes a drug and rehabilitation program, a welfare centre and community churches. It has been said that the Salvation Army offers caring support for every problem ‘from the cradle to the grave’. Despite suffering two heart attacks and prostate cancer, Alan continues to collect three days a week for the charity he is so passionate about, only missing the odd day for a medical appointment. At the age of 80, Alan has no intention of stopping his charity work. His dedication and diligence are remarkable.